It started with this...

...and if you take anything from this, what's on this little image is the most important part in my verbosity.

As soon as Michelle posted that on Facebook, I was filled with excitement, joy, more excitement, and keen sense of want. I wanted to be there, to get pictures of her carrying the flag and pictures of her dad in the survivor's circle... because trust me, this is a big deal. If you've ever been to opening and closing in a 3 day, you know it's a big deal.

At the opening, you're pumped and ready to go, and there's that small part of you that just wants to get going already. And I think they know it, because that's when the beachballs come out and they get bopped around for 10-15 minutes before the ceremony starts (and for the record, my head is a beach ball magnet, as evidenced by how many times I got popped on the head by them in San Francisco.) You go along with it while Stretching Dude gets you warmed up, and you really start feeling like you want to get going.

But then it really starts. People bearing giant pink flags come streaming out--a bit slowly--from behind the stage, and those flags say "MY MOTHER," "MY SISTER," "MY FRIEND," and "MY FATHER," among others. You still want to get going, but the meaning of what you're about to do really starts to sink in again. And then the survivors come out, and they raise the flag bearing names of those who didn't make it...and it really sinks it.

If you don't get at least a little choked up, you have a cold, dark soul...

Since I was so far from my goal for Atlanta, I shoved the idea of being there to the back of my head. At that point I was nearly $800 from goal, and I knew that if I didn't hit it with fundraising, I'd be covering the cost.

And that's fine; I signed up knowing I might cover most of it.

Then comes today, where instead of getting outside and taking a nice, long walk, I sat here most of the day texting with a friend. There was a lot of "I have to go in just a minute" which never quite turned into actually getting up and doing anything. She's bored; her spouse thingy isn't home and her kids are with their grandpa today, and I was just engaging in some professional procrastination. I didn't feel pushed to get up at any given moment, because the weather is turning and it's cool out, so there was no heat to beat by getting out the door early. And I only planned on 6-8 miles anyway. 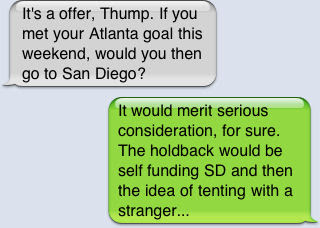 We started talking about the 3 Day, about Michelle carrying the flag, about Atlanta and fundraising and--admittedly--not liking the idea of asking people for more. There's such a thing as compassion fatigue and once people start feeling it, they stop donating.

And I get that. You can only do so much.

But then she offered something: if I hit my goal this weekend, would I consider going to San Diego? 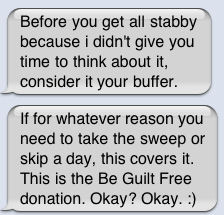 I'd been thinking for about 10 minutes when she sent another text message.

She covered the difference between what I've raised and my goal.

Not necessarily to go to San Diego for a third walk, but as a buffer for the Thumper-Patented-Guilt that would follow any need to take a sweep van or even skip part of the Atlanta walk.

For the record, it would still feel like failure--and that doesn't have to make sense, it just is--but at least it would be a donor-approved failure.

Fine. Point and laugh at me. I can take it.

It also opens the door for one last walk this year. One which will likely be mostly self-funded, which does chip away at the idea that I need to walk it all. It would be just for me, no expectations on anyone else's part.

Hate the idea of tenting with a stranger.

The only real thing standing in my way is knowing that about 3.5 weeks after that walk the Spouse Thingy and I have plans to take the first real vacation we've taken...ever. And the things we're planning on will require a lot of walking.

I think I'll have recovered by then, but...

Lots to think about.
Posted by Thumper at 4:54 PM

That is soooooo cooool! Think on what you need to think on. I know how important this is to you. I am excited for you and all the women that go with you.

When is the San Diego three-day? I won't be able to donate much, but I will donate something. I would also come down to San Diego to cheer you on...I'm only about 2 hours from there. Good luck with whatever you choose.

The San Diego 3 day is Nov 18-20...not sure about where the cheering stations and the like will be yet, though...

Could you crew or something other than do the actual walk?

Crew positions have all been filled for a long time...I have time to think about it, though....