You know if a city with a 3 Day Walk has a street known locally as "Cardiac Hill," that whomever is in charge of mapping the route is going to make sure that said street will be smack dab in the middle of one of the days' routes.

Probably Day 2, since that seems to be the hardest day.

I'm also convinced that there is no such thing as a mostly flat 3 Day route and each and every hill that's accessible will be part of the typical 3 Day Walk.

That's not a complaint. not really... Well, maybe it's a tiny one. I'd like to walk in a mostly flat city someday.

Still, with that in mind, and with the weather not exactly terrific for heading to walk in San Francisco, we headed for UC Davis Medical Center in Sacramento, where the Spouse Thingy spends an inordinate amount of time passing gas, because they have what amounts to indoor hills. 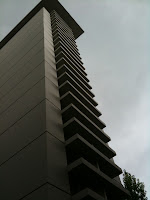 Standing outside, looking up, it's almost intimidating. That just looks a lot higher up than it actually is.

It looked worse last year, when he first took me to walk the ramps inside.

In fact, I remember looking at the ramps last year and thinking there was no way in hell I would make it all the way up without barfing all over everything.  And seeing the ramps was intimidating. I think I figured I'd go up once, come down, and be done with it. 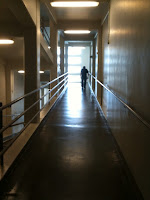 With Cardiac Hill in my head, we headed inside the building and went straight for the ramps, and oddly enough, they weren't half as intimidating as they were last year. I didn't exactly squeal with joy at the sight of them, but I didn't feel a sense of dread either.

I'll take that as progress.

We went up and down 5 times, further than we went last year. We stopped after that, not because going back up again would have been too hard--I was quite happy to know that I could have--but we had other things we needed to do, and we fully intend to hit the gym tomorrow, and I want to not be too sore to go. 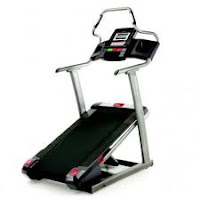 Because the gym...it has this thing.

I've never tried it before, because up until now it has seemed intimidating. It has freaking handles to hang on! You wouldn't need to hold on for dear life unless it was a total bitch to use, right?

I'm not sure what the max incline on it is, but I've seen some online with as much as 30% and with 6% declines.

I need to try this just to try it. And I'm not worried about falling off it now. Only worried about running out of steam after a few minutes in front of all those women who are so thing that their heads make them look like walking lollipops.

I think from here on out, until DKM and I leave for Atlanta, my short days are going to be focused on getting more prepared for hills. I'm not worried about distance; I can do 20 miles. It's the hills that make me unhappy on the 3 Day, and that's just because I get winded and nauseated if they go on too long.

And since we'll be at the gym, I'll probably swim, because hey...swimming is fun.

As long as there aren't any creepy old guys in the pool.
Posted by Thumper at 6:50 PM

Yay you, Thumper! I grew up in Pittsburgh PA which has its own "Cardiac Hill". The street I grew up on and my parents still live on would also qualify as a Cardiac Hill as well. I am now living in the flatlands of O-Hi-O, and woefully out of shape. Good for you for preparing for Cardiac Hill in Atlanta. Can't wait to see the photos.

Mom Sue to The Furry Bambinos and Assorted Fosters