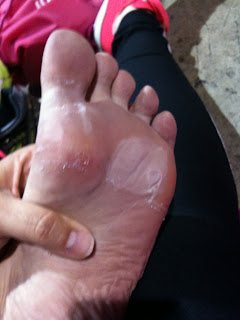 This is what I started out Day 2 with.
The wonder blisters.
It actually didn’t hurt as much as it looks like it would; liberal applications of 2nd Skin and triple layers of Moleskin and it was good to go. I got dressed, headed for breakfast and DKM’s food line, forced myself to eat, and then waited for the rest of the team (I intentionally ate early, knowing me + food + walking = ugly, ugly things.)
Now, today was supposed to be flat, right? I begged the Walking Fairies; I can handle 20 miles of flat. Flat is good. I worship the flat when it’s ground that’s involved.
Yeah. About that…
It didn’t take long for the Walking Fairies to sprinkle me with Disappointment Dust. Granted, the hills we encountered early weren’t horrible and not even whine-worthy, but…
But.
Around 4-5 miles in, halfway up a not too steep incline, I felt a sharp snap in my right foot, followed by searing paid that raced along the outside edge of the sole of my foot, with a white-hot trajectory up through the bottom heading towards the ankle bone. It was sudden and surprising, and lingered for a while…and I kept walking. I probably shouldn’t have but I assumed it would ease up; after all, that hill had a peak I could see and the terrain was not the greatest (Atlanta…y’all need to work on your sidewalks, you really do…) so I didn’t see how it would hurt to get to the top and see.
And ease up it did. For a while, anyway. For the rest of the day it poked at me off and on, sometimes making me limp, sometimes just ticking me off. It hated the inclines more than the flat, which just gave me a reason to grumble with every new hill we headed towards. And eventually it never quite got to the off position, but that was later in the day and not a horrible issue before lunch. 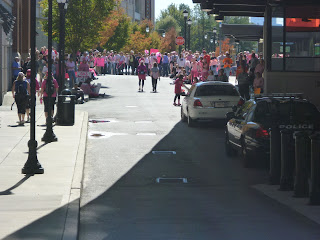 But something I couldn’t grumble about…the people out cheering for us. We headed into this one, and from a distance I could see there were a ton of people so I stopped to snap the picture, but I had no idea.
The people I could see were just the ones up front. It went on for a couple of blocks at least, people lined up 3 and 4 deep, cheering and shouting, handing out candy and stickers. Hundreds and hundreds of people there to give the walkers a shout out.
People, let me tell you: it works. When you’re at the end of your rope and you walk into a crowd that exists just to bolster you up, it makes it a little easier to reach up and pull harder. Crowds like that are renewed energy. They’re worth miles of effort. They make a walker smile and cry all at once. 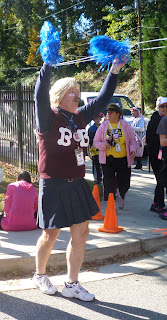 Overall, the community support in Atlanta was incredible. There weren’t many areas where there weren’t people out with signs of support, and there was a lot of handing out of candy, cookies, fresh bread, coffee…and Coke. On Day 2 we passed a family sitting there with a couple of coolers, offering Coke and Diet Coke to walkers.
I am a diet soda addict. I told the kid handing me the soda I loved him and I think it freaked him out a little.
I ambled along, enjoying the cold Diet Coke, a lull in the pain in my foot, and the flatness of land ahead.
But then the ugly thing happened.
A hill.
And not just any hill. I don’t think it was “cardiac hill” but it might as well have been because that sucker went on for-freaking-ever.
My foot finally rebelled, and didn’t stop screaming at me until the end of the day, when I treated it to a nice long hot shower and then sat my ass down to do nothing for a while.
Day 2 was hills. Not the flat I’d begged for. Hills.
Granted, they were not San Francisco type hills, and if not for the foot I think—other than the one hill that turned out to be about 5 miles long—none of them would have bothered me much, at least not physically.
Hills are a mental thing, and by next year I fully intend to make them my bitch. 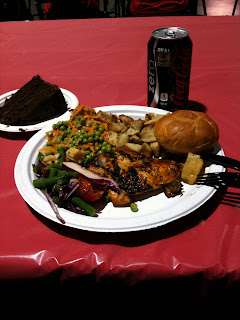 After treating my foot to a nice hot shower I treated myself to dinner…and man, the food was awesome.
I didn’t even wait for the rest of my team. I ate, then hung around the dining area and talked to other people until I spotted them filtering in, and then wandered over to sit with them.
If I hadn’t been so stuffed, I might have snuck back into the food line; it still smelled awesome.
Have I mentioned that DKM took really good care of me? Lights out was at 9:30, right after the end of the camp show (and some day I’ll stick around and see the entire thing; I was happy enough to see half of it before exhaustion sent me to head for bed)…and right about that time the people in the tent next to us decided to pack up as much of their stuff as they could, to avoid having to get up a little early in the morning to do it then.
We were in the crew area; crew gets up earlier than the walkers for the most part, so I kind of get where they were coming from, BUT…I was trying to sleep and the line of tents across from us was also walkers trying to sleep, and they were freaking noisy.
At 9:45 DKM stuck her head out the tent and read them the riot act. And when they tried to defend what they were doing she said sharply, “There’s a WALKER in here and SHE NEEDS TO SLEEP!”
Yeah…they quieted down after that.
And I slept like a rock for the most part, and I’d need it heading into Day 3. We only had 15 miles left to walk, but with blisters on one foot and aching pain in the other…yeah, sleep was my friend.
Posted by Thumper at 9:03 PM

Mum says the worst hill is the long gradual one. Seems to go on furrever. Always uphill.

I love that you are able to put into words what I am only able to think. This was my first 3 day and I'm hooked. I could have done without all those hills though! Those hills may not have been steep but they were flipping endless!