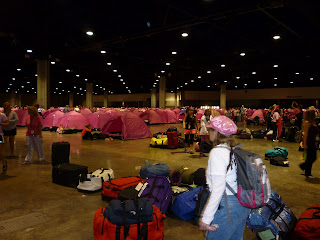 Morning in the crew area of camp starts at approximately 3:30 a.m. While the walkers catch a few more Zzzs, the crew gets up to get everything ready so that the walkers have an easier time. Being on the food crew, Michelle was up a little earlier than most, because those crew members need to eat before hitting the road to set up for the oncoming horde of people in pink.

On Day 3, things get rolling a little earlier because everyone has to pack up and take down the tents before leaving the campsite. By 4 a.m. the crew area was buzzing with voices kept low for the sake of those who were still sleeping and zippers on tents being pulled up and down. I tried to lie there and snooze a while longer, but between the noise of people trying to be quiet and my bladder screaming at me to get up…I was up.

At least I didn’t have to stumble through cold, dew-wet grass to get to a port-a-potty. We were pretty close to the REAL TOILETS so I got to stumble over cool concrete, only considering after I was already in the restroom that I probably should have put some shoes on. Cooties and all that.

Breakfast, packed up, bag dropped off with the luggage crew…we lined up to leave, ready to tackle the Just 15 Miles we had to go.

That was a comforting thought. JUST 15. I needed it to be JUST because my feet? Not so happy with me. The blisters on the left foot, while looking all right, were poking at me, and my right foot was throwing a temper tantrum. I had a nasty feeling something was afoot (hahaha) but I’d gone this far, so a few more miles couldn’t hurt any worse.

Besides, I got to see stuff like this. Piedmont Park and its amazing view of the city skyline. 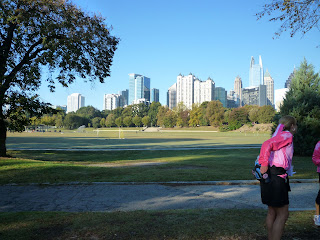 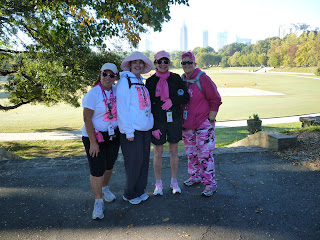 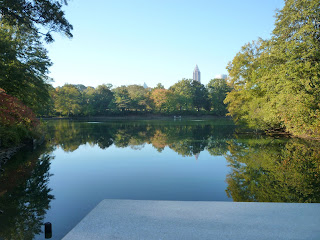 Luckily, the terrain was flatish and other than one section, doable. My feet, though, they were protesting even the flatness to which they were being treated, and as I got to the lunch area—by now separated from my team—I formulated the stellar plan of sitting down and checking my feet, changing socks and Moleskin, getting food, resting for a few, then hitting the road for those last few miles.

My brain was not fully engaged at this point. I took care of my feet, rested a few minutes…then left without lunch. Granted, I was hungry, but with this many miles chewed up and spit out, I’m always hungry, even after eating. It wasn’t until I was far enough away to know that going back was a bad idea that I realized I was irritable because =DUH= I didn’t have enough fuel on board.

I grabbed almost all the candy offered to me, but after a while that just makes you feel queasy. With 1 mile to go to the next grab-n-go I nearly grabbed a sweep van; in fact, I sat down at an intersection and the route safety guy was going to flag one down for me, but after 15 minutes I felt like I could get up and go on.

And like an idiot, when I got to the grab-n-go, where there were chips and fruit and fresh water…I passed it. It was up an incline and I didn’t think I could get up there, and I decided that since the next pit stop was just a mile away I’d go there.

Over the next mile I was asked by no fewer than 20 people if I was all right—I was limping horribly at this point and probably not walking a straight line—and if I needed them to find a sweep for me. I was not all right—low on fuel, hurting, not thinking straight—but I said I was. Boys and girls, when you participate in a 3 Day (and I know you will) DON’T say you’re all right when you clearly are not. I should have stopped. I should have asked someone to get a van for me. But I didn’t, because I am 4 different kinds of stupid.

I got to the pit stop and among the cheering crew at the entrance was a medical guy dressed like a bunny…who recognized that no matter what I SAID, I was not all right. He steered me towards the food, told me to eat some chips and fruit and to drink, both water and sports drink, and to sit.

I did what I was told. I grabbed some orange pieces and sucked them down, then chewed through a bag of potato chips, and sucked down some sports drink.

Why dwell on this? Because somewhere out there might be someone who has never done a 3 Day and is going to and I want this to be the message:


DON’T BE STUPID.
DON’T TAKE UNNECESSARY RISKS.
IF 20 PEOPLE ASK IF YOU’RE ALL RIGHT…YOU ARE NOT ALL RIGHT.
Ok.

The next stop was holding, and we got to “hold” at Turner Field in the concession area. I wish I had explored more of it, but after getting my Victory t-shirt (clearly, my real reason for walking) I plopped down and didn’t want to move. I did get up after a while to cheer incoming walkers and slap out some high fives, but after 30-40 minutes of that I had to sit back down, because my foot? Not happy.

After all the walking, closing comes rushing at you. With all the walkers in, it’s time to line up and head out for closing ceremonies. I don’t know about everyone else, but I feel two things during closing: overwhelming awe and a want of being done. The wanting to be done feels a bit disrespectful, but pain sometimes overrides the want of being respectful, and , well….I kinda wanted to be done.

Community participation didn’t end at the cheering stations. As we moved into the closing ceremony area I looked up…hundreds of people lined the wall around us. Families and friends were crowded around us, and community surrounded us all.

But I still kinda wanted to be done.

But I also wanted the survivors to have their due. As they come in and take the center stage, everyone takes a shoe off and holds it up in a salute…but my feet were so swollen that I realized if I took a shoe off, it was not going back on. If I took a shoe off and set my foot down, I would have no support for that foot, and down I would go.

I felt like a troll, but I didn’t take a shoe off. I may have been the only walker there with both shoes on.

My sincere apologies to the survivors.

And then just like that, it was over. I hugged the teammates I could, because I knew as we made our way to bag retrieval I would probably lose sight of them, and we weren’t staying at the same hotel…and I’m glad I did because the last I saw of any of them besides Michelle was as they headed for the line where their bags were.

We did it, though. We walked the walk and Michelle not only crewed but had my back the whole way (including a few ARE YOU DRINKING texts LOL) and all that was left was getting to the hotel.

The hotel that was supposed to be “on site.”

I always thought that walking 60 miles in 3 days would be brutal, but now I know specifically how brutal. Hat off to you and everyone else who participates in a 3 Day.

DKM sounds like a real sweetheart for taking such good care of you.

Mom Sue to The Furry Bambinos