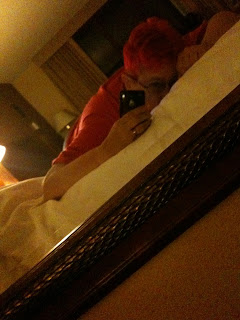 Day One for DKM started at OMG! O’Clock; she had to be up and outside for the 4 a.m. shuttle; I got to lie there and soak in a few more warms, since the rest of the team wasn’t meeting for breakfast until 5 a.m., after which we were going to try to be on a 5:30 shuttle (they said the last one was leaving at 6:00…since there were a whole bunch of other walkers with the same idea, I’m thinking the shuttles ran well after six…)

Now, here’s the thing about breakfast. At the host hotel in San Francisco, there’s a free buffet with cereal and bagels and muffins and other breakfasty type things. I gather from talking to other walkers, it’s been the same in other cities. This hotel opened a buffet at 3:45 and we hit the buffet line and got our scrambled eggs and grits or oatmeal and fruit…and man we were all surprised when it turned out to be $13 per person.

But, whatever. We had to eat.

It was a quick shoveling of food into mouths, and we headed for our luggage and the shuttles. And man, when you think of Atlanta you think “warm,” not nipply, but it was kinda chilly outside. I was very grateful for my long pink camo pants—I almost went in shorts—and my pink 3 Day sweatshirt. Still, when we got to Stone Mountain, site of the opening ceremony, I was wishing for triple players because it wasn’t just nipply, it was cold. Very very very cold. Still dark out, and frigid.

Did I mention that it was cold?

Atlanta, next time I’m there, please make sure it’s a constant 73 degrees with low humidity 24/7. Thank you. 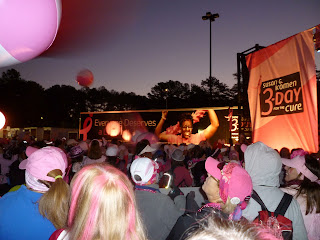 Once the ceremony started, the cold seemed to slip away. Sure, the temperature was still low, but we had moved en masse toward the stage and 2400 people trying to occupy one space creates a little heat. And we were getting amped up; we wanted to begin, even though we wanted to savor that moment. The Pink Slips were pretty close to the exit point, which meant we would be among the first to hit the route.

The route out of Stone Mountain was beautiful. It was still freaking cold, but…beautiful. And I learned within minutes that I’ve lost some speed; my teammates hit stride easily and were off, and I kept getting passed by walker after walker, until I realized I’d probably been passed by about 600 people.

It’s not a race, but still…I was way behind my team. And it set the tone; this was not going to be a speedy walk. That was all right; I fell in with several other people and talked to them. Some were first time 3 Day walkers who had tons of questions, some were pros who totally understood the concept of walking your own walk. They had teammates who were already ahead, too, and some were behind. In the grand scheme of things, it’s no big deal.

While I wanted to walk with my team, this part of it was just as important for me. The whole trip out there was important; it was an exercise in taking myself far outside of my comfort zone. I just don’t go places without the Spouse Thingy often, especially trips. I’m shy; initiating conversations is not my forte. But when I overheard newbies contemplating what was ahead, what to expect, talking about how nervous they were, was it even possible to do this, I jumped in.

I spent some time with a couple of people who had kids who wanted to walk but were too young; they were happy to hear about the Youth Crew opportunities. I walked with some people concerned over a teammate who was walking at 5 months pregnant. I was amused over some ROTC cadets running beside us with full ruck sacks, complaining about blisters after just a mile or so.

I caught up with some of the team at the first pit stop and we headed out together and towards the first cheering station. And that’s when I realized this was going to be a little different than San Francisco. We got cheered in SF. We got cheered in Georgia. The sidewalk was lined with people waving and shouting, offering candy and snacks, pink balloons floating overhead and offerings of signs we could carry and ribbons to wear. It was emotional, and a sign that this walk might have a different tone.

Now, remember that I said I was taking my Camelbak because with it I tend to drink more? I did take it. And I was drinking more. I also—I don’t know why—took a spare water bottle and clipped it to the outside of the pack. At the second pit stop I was grateful for the spare, because as I got up, Roberta pointed out the water running from the bottom of my Camelbak.

One of my helpful teammates took the leaking bladder from me to throw away as I went to fill my thank-god-I-had-it water bottle, and Roberta took my sticks so that I could deal with the wet Camelbak pack. I wound up carrying it with the backside out, awkwardly, hoping it would dry enough to use as a backpack. 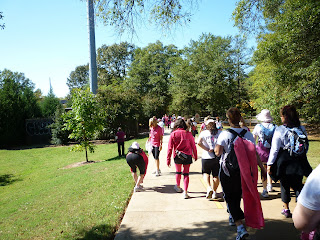 Somewhere along the way, the sticks became toys and were passed around to try. And at some point a spring was sprung, and the lock on one couldn’t be tightened anymore. I was left with a walking stick that I couldn’t put weight on, and I couldn’t really carry because it kept sliding out and hitting people.

But ya know what? Those things were getting in the way and annoying the snot out of me, so tossing them into a nearby trash can was not upsetting at all. I really couldn’t use them in the crush of walkers, and carrying them was a pain in the ass, and with over 12 miles to go…yeah, dumping them was a relief.

Not even halfway through the day I’d lost my Camelbak bladder, broken the sticks…surely everything else was going to be smooth as silk, right?

I was really starting to slow down in the afternoon. I had blisters on my feet, but those weren’t too bad. They didn’t scream nasty things at me with each step, they simply muttered “ouch…ouch…ouch” every once in a while. But my back? My back was increasingly unhappy with me. Those vertebra that went on strike last December and sent me to physical therapy started whispering to me around mile 13, were yelling at me around mile 14, and at close to 15 started screaming Bitch, sit yo’ fat ass down now or we gonna cut you a new one!

Sandra was walking with me, not complaining at all about my snail’s pace, and when I said I thought I needed a sweep van, she flagged one down.

Hell, yeah, I took one. I could have sat there at the side of the road for an hour while I rested, but the vans are there for a reason, and dammit, I was taking one. It cut about a mile and a half off my day, but so what? And ya know why I think it was a good idea?

Because I struggled to pull myself into the van. It hurt so much to get up that step—they had a stepstool but it still took 3 tries to get inside—that I thought my day was over. I enjoyed the ride (along with 7 other people) and presumed I’d be getting on the bus back to camp at the next pit stop. But…after taking the van and getting something to eat and drink at the pit stop, I’d had enough time for the screaming to stop.

There were only a couple more miles to go, anyway. 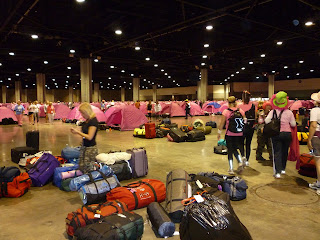 It was an awesome sight, all the pink tents going up. In the next room was the 3 Day Shop, Post Office, Treat Pickup (thank you for sending me candy, Leslie and Susan!), New Balance, the 3 Day lounge…and food.

Holy crap, the food was good. Or I was really hungry. But I think it was pretty damned good.

Food was a slight concern going into Atlanta; I got sick in San Francisco, remember? One of the theories was that the meatballs I’d eaten had a mushroom base. No meatballs = no protein in the meal for me…which is fine, I can live one meal without it, but those were damned tasty meatballs and I kinda wanted a couple of them.

Michelle was there crewing on food services, and she grilled TPTB about what was in the food being served, looking for the things she knows I can’t eat. I made sure to go through her line so she could tell me what I could eat and what I needed to avoid. And yay! I could eat anything I wanted, except the macaroni and cheese, and that I avoided because dairy on a 3 day would not be I my best interests. Or Michelle’s, since we were sharing a tent.

There was no huddling near a single heater in the dining tent. Inside…yes, yes, yes. We still had to go outside to shower in the semi trucks, but overall, the idea of being inside made me happy, and I went to sleep really looking forward to Day 2.

Because day 2 was going to be nothing but flat.

Yeah - I fraking hate the am too, and sometimes knowing I have to get up extra early means I sleep horribly the night before. I can't wait to hear how the next two days went. Indoor camping must have been really nice for all of you so you didn't freeze any of your parts off.

Hello ...
I did NOT break your walking sticks.
Just sayin'.

Doesn't matter how they broke...it really was a relief to dump them...sooner or later I was going to whack the wrong person with one and wind up with it jammed painfully up my personal spaces, and that would have made walking...um,...well I woulda been walking upright, for sure...