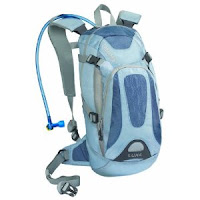 The low mileage was intentional. I headed for the outlet mall this afternoon intending it to be a short walk so that I can get used to using my camelbak again.

There's some question about what made me so sick on Day Two of the SF 3 Day. Initially the Spouse Thingy thought it was the flu (or similar virus) but I still had an appetite and recovered within a few days. Then he wondered if I'd gotten a stealth mushroom at dinner on Day One; the meal was pasta and we asked about mushrooms, but were assured there were none. And it looked like typical marinara sauce, so I ate it.

I also at 2 meatballs, mixed vegetables, some kind of cucumber salad, and 2 bites of a brownie (and trust me, I wanted the whole thing, but I was kinda full by then.)

Me after a mushroom looks a lot like the flu. So he wonders if there was a mushroom base in the meatballs. Two friends who know me well enough have mused that the meatballs probably had soy filler, and I am very intolerant of soy.

But Murf had another theory, one the Spouse Thingy doesn't quite agree with because I was eating and drinking normally: dehydration complicated by being medicated for diabetes insipidus (I might not feel the thirst on the medication.) Since I do have diabetes insipidus, dehydration is something I really have to look out for. If I get dehydrated (well, like anyone else) my electrolytes go wonky, blood sodium shoots up, blood can run thicker, it feels like being run over by a truck, nausea can become a problem, as well as fever...

I did drink while walking, but I may not have had enough. Looking back, I think I consumed about three bottles worth, which is only 48 ounces, but I also sucked down a can of Diet Coke at dinner and had around 6 more ounces of water later.

The thing is, we'll never really know if I was actually ill, if I was having an allergic reaction to something I ate, or if my electrolytes were out of whack, but of those three, I can control one of them in Atlanta.

I drink more when I wear the Camelbak. I think it's because the tube is right there bouncing around in front of me and I just naturally reach for it, whereas with bottles I wait until I feel thirst to reach back and grab one. So in hopes of increasing my water intake (and Gatorade, I gotta remember to drink Gatorade) I'm going to start using the Camelbak again.

I learned the last time I tried it, though, not to start out on a 15 mile walk with it.

So. 3.5 today, more tomorrow. I'll play it by ear over the weekend, and then take it to San Francisco next week.

Just did a little reading on your condition. E gods, woman! I promise never to complain again about a migraine. I promise. You have courage and guts and your a great kitty mom.
Take good care of yourself.