Just a tad under 15 miles today. I headed for the factory outlet mall not too long after I got out of bed at later than I should have, with a goal of 12-15 miles. I was fully prepared, though, to bail after just a few if my back clenched up.

My back decided to play nice today and I got into a pretty good rhythm right off the bat, and I was moving along at about a 3.4 mph pace. I made myself take a break at 6.5 miles so that I could change socks and get a drink, though there was that temptation to just keep going and get it over with quicker. 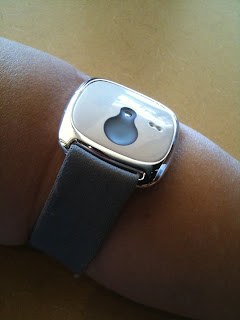 When I sat down with my large Diet Pepsi and started to fish for my cell phone (because what’s a break without playing on Facebook?) when a woman about my own age approached, gesturing to my arm.

“What’s that thing? Is that like one of those ankle monitors? But why is it on your arm?” I couldn’t get a word out, she was just barreling on. “And how come you’re outside? Aren’t you supposed to be stuck at home? Do they know you’re out here?”

I love it when I get a chance to think before speaking. It happens so rarely.

“I get a day pass if I go thirty days without biting anyone.”

Sadly, I must not have the greatest poker face, because after a measured beat she laughed and asked again, “what is it?”

It’s a Body Media armband; it measures the calories I burn. It does a bunch of other things, but that was the easiest to explain. At the end of the day I can connect it to my computer, and see how much I burned off during the day and compare it against how much I ate.

I think she was actually disappointed. 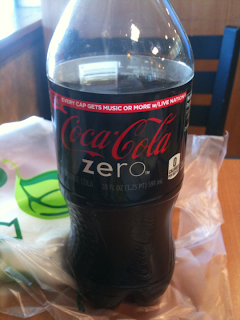 She moved on, I moved on. I did a few more miles and stopped for lunch at 11.5 miles; since I was close to 12 miles I settled on a Subway sandwich, knowing it might not agree with me. If it didn’t, I could just get in the car and go home. If it did, yay.

What it did was make me realize how freaking hungry I really was. I scarfed it down, and if not for knowing that if I ate anything more I would really regret it, I might have gotten another one.

I looped the stores a couple more times, and at 14.75 or so I was so close to the car that I decided I was done. I could have gone on, but the car was right there.

The good news is that going another 5 didn’t feel like it would be a problem at all. I had one tiny blister that I slapped some 2nd Skin on and covered with some Elastotape when I changed my socks, but it felt fine after that.