We took the BART San Francisco today so I could get a few hills in, and all in all we walked about 6.5 miles. I wanted to get off at the Civic Center stop, because we usually get off a stop earlier, and I knew the Spouse Thingy hadn't seen the area before. 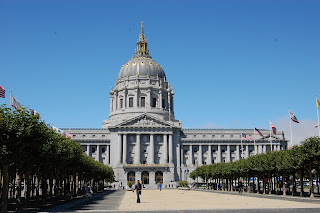 It was pretty cool for about 10 minutes...I had it in my head it would take longer to wander around there, but once you've seen the spiffy city hall building and the others surrounding it, you've seen them and it's time to move on.

So we headed up Hyde Street. I know where Hyde ends--not too far from Ghiradelli Square--but I'd never been on the south end of it, so what the heck. why not?

It's not the most touristy of places to be in San Francisco. It's so not touristy and kinda rough that we turned on Eddy and headed for familiar territory. A couple of blocks down Eddy and we heard the whoop-whoop of a siren and looked around; across the street, surrounded by several bike cops, there was an old guy flat on his face, half in the street and half on the sidewalk. Other than the police, no one seemed especially concerned.

Maybe because it was half a block from the Tenderloin police station? Or maybe because they either didn't give a damn or are used to people face planting onto the pavement? I dunno. His fingers were twitching so he was alive, but I'm guessing by not very much. 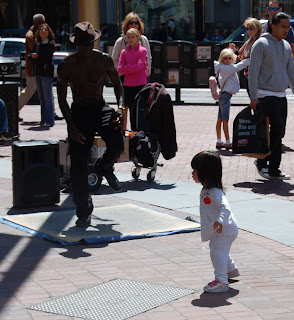 We kept on walking, until we were at Powell Street, where the cable car line begins (or ends, depending on your POV.) The line to get on the cable cars is long, usually a good hour's wait long, and there's always someone there dancing or singing for donations.

We've seen this guy a few times and he's pretty good, but today he had help from a toddler who decided to dance right along with him.

I don't think he was as amused as we were.

From there we just wandered. we headed up Powell because it's got a decent incline to it, and I grumbled about my knee not liking how steep it is and how damn high my heart rate was going. No whining, though. Just grumbling.

We didn't stay long, just long enough to learn that the Tenderloin is not going to be on our future list of Places to Walk, and long enough to get a few hills and a little over 6 miles in.

Only 3 and a half weeks to go... I may get one or two more really long walks in, but for the most part I think from here on out it's going to be 8-10 miles at the most with lots of shorter walks, mostly to preserve my back. That's the one thing that bothered me today and what stopped me nearly dead in my tracks at about 6. We took a break for lunch and Motrin, but that was it. I was done.

It was enough, though. The distance was about right for today and the hills were a necessity; I'll do similar length walks this week and do a long one this weekend, if I can decide where. I'd like to avoid the heat if I can.
Posted by Thumper at 7:15 PM

Some guy jumped out from behind a bush on Powell (I think) and scared the sh*t out of me. I let out the scream heard 'round San Francisco. (Many people laughed at me. I guess the guy does that to the stupid tourists.)
R

Tree guy :) He was on the Embarcadero a few weeks ago and the shrieking was pretty funny...but then it wasn't me, so of course I laughed...