Man, how hot is it in Boston...? Hot enough that yesterday they closed the route around noon, which means no one got further than about 10 miles, and today they were stopping people at one of the pit stops and putting them on buses to go back to camp. It's too hot to be safe... I saw mention on FB of a few people who had been taken to the hospital, and a few who decided they were done whether the SGK people opened the route up again or not.

Better safe than sorry, for sure. 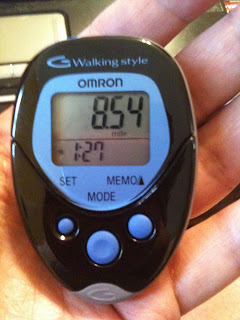 I still use the Garmin, but it's problematic in some places. If it can't pick up the satellite signal, it's worthless, really. And if I want to walk around the Factory Outlet Mall in Vacaville, it misses about half the distance, leaving me pretty frustrated. When you've walked for an hour and it says you've only gone .85 miles, it feels like a massive mound of Teh Suck.

So I picked up an inexpensive pedometer, programmed it for my stride, and have been trying it out. So far, it's pretty much right on the money. I walked a route today that I know is 8.5 miles, and when I hit the door it read 8.52. It took me some time to think of snapping a picture, but since I had mostly been sitting on my asterisk, I didn't exactly rack up a whole lot of extra steps.

I even compared it to my Body Media calories tracking thingy, which also functions as a pedometer (though there's no display, so it's not practical to use while walking) and the difference between it and the Omron was only 60 steps, some of which can be accounted for before I put the Omron in my pocket and took off.

I used it the other day in San Francisco, too, but that was the first time and I really didn't have anything to test its accuracy against; knowing the route I took today gives me a decent idea, I think.

I stopped at 5.5 for a drink break and to use the McD's facilities; while I was washing my hands (yes, I am not a total slob) a woman who was waiting for a stall asked if I was all right. Apparently my beet red, sweat-dripping face was alarming. I assured her I was fine, had just been out walking for a while, thanked her, and headed to buy my drink.

As I was filling the cup with ice, another woman approached to ask if I was all right, and did I need help?

Now, I could dwell on the fact that exertion apparently brings out the Ugly in me, but really, it's just nice to know that people give a damn. They didn't have to ask; they could have waited until I keeled over and then waited some more to see if someone else would do anything. People like that are just another reason I love living in this little town.

Tomorrow is a short day, only six miles on the schedule. Since I'm breaking in the new shoes I don't think I'll push much past that, but I'll probably go see how crowded the gym is and hit the pool if I can get a lane.
Posted by Thumper at 1:57 PM

I walked outside to feed Joba this morning and the humidity was pretty intense ... so I made the decision to treat myself to a rest day today.
The end.

Me again.
I found this and wanted you to reread.
You are doing TWO walks when, at one time, you wondered if you could complete one.
YOU are an inspiration!
http://awabbitwalking.blogspot.com/2010/10/and-we-walked-and-we-walked.html
Just sayin'!

Next time, tell the nice concerned people why you're out walking. If they don't offer, hit them up for a donation! ;-)

Mom Sue to The Furry Bambinos