How I'll Learn To Love The Treadmill

(The TL;DR = I walked on the treadmill and watched video on my iPhone! Yay me!)

<-- Those temps were enough to convince me that having a treadmill is a very good thing. Now, I'd intended to make use of it yesterday; I woke up early with every intention of getting outside and chewing off 13 miles before it got too hot, but the giant OUCH YOU MUTHRFARKER that my back screamed convinced me that staying in bed for a while longer was a good idea.

Because, you know, I own a treadmill and I could get on it later, when the OUCH YOU MUTHRFARKER had eased into nothing more than OY.

And I did try, but walking on it hurt, so yesterday became a day of complaining about not walking. It also became a day of reminders, like, um, raise the incline on it to ease how it impacts your back... (thank you, Dean :) )

And this morning I had every intention of getting up early, but I slept like crap, waking up every half hour and tossing and turning. So I didn't drag myself out of bed until Max headbutted me at 9, and let it be known that he wasn't going to stop until I sat up. I did all the things I was supposed to do, in the order he wanted me to do them (because honestly, if I deviate and do something outrageous like take my meds before I pee, it totally throws him off) and then opened a can of food for the kitties. The back felt quite a bit better, and I eyed the treadmill...and then went into the other room to play online for a bit.

The plan: watch a DVD while walking on the mind numbingly boring treadmill. Maybe two. It took me a while to figure out how to get the TV in the gym (ha! Yes, we have a gym at home...a treadmill and a Bowflex. That totally counts as a gym...) and the Wii to play together, but I did and I popped a DVD in...and promptly discovered that the Wii does not play DVDs.

I tried watching TV but you know what's on TV on Sunday?

Nothing. 500 channels of nothing. And it wound up not mattering, because in order to hear the TV over the treadmill, I would have had to set the volume high enough to wake the Spouse Thingy. 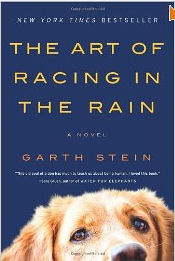 So I plugged the earphones into my iPhone and continued listening to an audiobook. I'm currently listening to "The Art of Racing in the Rain" which is an incredibly good story, told from the POV of a dog, but it's one that makes you get all choked up, and I have a feeling that pretty soon it's going to both piss me off and make me fight doing the ugly cry, so it might be better that I'm listening at home, where no one else can see.

Now this is when I began to realize the benefits of having a treadmill at home and actually using it. I didn't need to worry about where I was going to be when the inevitable need for a place to pee became an issue. I didn't need to worry about what I was going to eat for lunch and what digestive disturbances might occur. I could take a break and sit on my own couch and eat whatever the hell I wanted, because hey, if the horrible things happen, I could get off the treadmill and run down the hall. My water bottle wasn't going to run out and be a problem because...righto. Kitchen is right there.

Plus, on the treadmill it's a steady pace. There's no "am I really hitting three miles an hour?" because the speed is set there and it's not going to slow down for stop lights and people blocking my way.

I got online while I took a break for lunch and bemoaned the lack of a DVD player--not thinking about the whole volume thing--and the Boy reminded me that while the Wii doesn't play DVDs, it does work with Netflix Instant.

Then I got everything set up and remembered about the sound issue. But hey! My iPhone will run Netflix! I got it setup, got on the treadmill, and spent another hour on it, listening to Craig Ferguson doing stand up and trying to not laugh loud enough to wake the Spouse Thingy.

Six miles down without overheating and sunburn. And I'm not done...I hopped off for another break and spent some time looking for more things to add to the Netflix instant queue. I'll get back on later and do another 3 miles, and maybe another 3 after that.

I did learn that the treadmill shuts down after 100 minutes. As if that's as long as anyone should be on it...

In any case, I may will make more use of it now, since we're getting into the Holy Hell It's Hot part of summer.

That means I can sleep in.

An hour on the treadmill is pure .....
TORTURE!!
(Yankees) cap off to you for being able to spend so much time on that INCREDIBLY BORING PIECE OF EQUIPMENT!
Wow .... I have a gym in my house, too! Never realized that 2 pieces of equipment (used or not)= A GYM!
I feel fancy!

We don't have a gym in our house. We just have a coat rack.