...and then we walked some more. 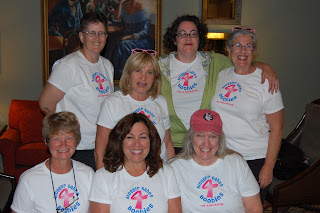 Blogger Babes for Boobies
Me, Phyllis, Michelle, Joette
Marty, Roberta, Karen
I have to admit, my tendency towards verbosity is failing me a bit right now. How can you describe an experience like 3 Day? Amazing, incredible, awe-inspiring don't even scratch the surface. Neither do hard, painful, and tough. But it was one of the hardest things I've ever done, definitely the most tough physically, and almost the worst in terms of pain. Yet it was also far more amazing and jaw-dropping incredible that I can even begin to say. There were 1400 people walking in San Francisco, and at least 350 volunteer crew members. I'm sure everyone there had more than just "hey this will be fun!" as a reason for doing this. I saw many, many names on shirts and signs, visible reminders of how much has been lost to breast cancer, how many have beat it, and how much more can be done.

If you've ever wondered if you could do something like this, two things to consider: how much you of yourself do you think you can dedicate to training for what will become Something Significant in your life, and...fark, Thumper did it.

Now, I knew there were going to be a lot of people walking and crewing for this event, but I didn't know. It's one thing to hear that there will be over a thousand people playing in the same game as you, but it's a whole other thing to see it. It's a whole other thing to feel it. The vibe is intense, and the atmosphere is electric; even if you walk into it alone, you won't be alone. If you can be part of a team, it'll be even better. You'll start as friends; three days later you'll be friends. You'll end feeling like you couldn't love these people more. You'll see more things to admire about them, you'll appreciate their resolve, and you'll be amazed by how tough they are.

You'll be amazed at how tough you are.

I will admit, I had moments of pride over the three days we walked. I faced a few obstacles that I normally avoid like the proverbial plague. Steep hills. Massive numbers of stairs. In any other situation I would have turned and found a less painful way to get from point A to point B, but with teammates by my side (and behind and in front of me) I went ahead and tried. And with only one exception--I had to avoid a Hell Hill on day 2 in order to be able to tackle day 3--I did it.

Yet, anything I did paled in comparison to the people around me. Roberta walked with a painful3 blister under her big toenail on one foot and a fitful arthritic toe on the other. Michelle walked with sciatica. Joette walked with a bad knee. And Karen...holy crap, Karen had major surgery just a few weeks ago and has undergone follow up treatments since then.

They all had reasons--not excuses but very valid reasons--to drop out, but they committed to it. I wasn't just impressed...I was blown-away-impressed.

No one whined, either.

There may have been some sharing of information--"Ow, my foot hurts," "Dammit, I think I have a blister," "There's another damned hill"--but there was no whining. How can you whine when you're walking for people who have been through so much more? You just don't. You put forth things for information, as Roberta said many times, but you do not whine. I did not whine about how damned cold I was in the tent the first night (and I equally did not squeal with bot delight and damn-I'm-stupididty when Michelle pointed out an important flap I had not closed, thus letting in all the cold and wind. I did not whine about the fog, wind, and cold the next morning as we headed for and then crossed the Golden Gate Bridge, nor did I whine as we descended Hell Hill. I also did not whine on day one when we approached the never ending (all right, 133 steps) stairs we had to climb in Land's End park. And I didn't whine on day 3 when confronted with ascending Hell Hill #2 in the city (Clayton & Ashbury, I think.)

I did share a lot of information in the form of "son of a bitch," "dammit," "Oh, fark," and a few other descriptive phrases.

My teammates discovered a few things about me as well, I believe. They think I'm quiet (eh...I just don't think fast enough for normal people conversation, I believe; it's easier to write, so that I can edit.)  I won't sing along (originally I just didn't know the words...then it was just funnier to not sing.) I don't dance (ok, that's just because no one should have to see that.) Yet, they didn't shun me halfway through, so I don't think I was too socially unacceptable.  ;)

Am I all over the place yet? My head still is... The thing is, it would take way too long to really pick apart and describe it.

But it was amazing. Painful. Joyous. Tough.

And I did it with some truly incredible women, who deeply inspire me.

A few pictures...more are at my Flickr page...but it might take a while to get them tagged and descriptions added, and they're in no particular order. I'm impressed/proud/humbled that you guys did this event. Way to go!!
~LSP Momma Becca

It's 12:13am New York time and I'm just getting ready to climb into my OWN bed with Jeter Harris (hizself) bt my side.
Thank you my friend for joining me on this journey. You're AMAZING! I loved walking by your side. You have a great voice and what a dancer!
Love...R

And you did not whine about wearing all that pink!

I guess superwomen wear pink too. :)

Very inspiring! I feel like I should at least participate in the Portland walk next year. It is only one day, but still for the same good cause. You are awesome and deserve to wear a cape, as all awesome, super heros do!
Stacie

Just commented on Thumper Thinks Out Loud lol. I hope you do get better asap, but also still think seeing a doc is a good idea.

Yes, there really aren't enough words to describe The 3 Day event. I have done 3 and I still have trouble expressing the depth of the walk. It's not just the walking, it the people who donate, the people who are battling every day, the survivors who come out to cheer and walk.
I said in 2005 it was a life changing event and i still believe that holds true today.
My goal is to walk again in 2011 or 2012.