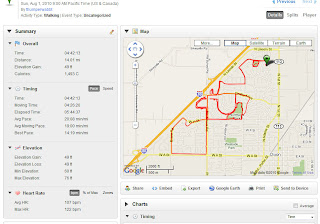 was the last one. The last half mile, that really sucked. I got to the small park near our house, knew I was within a quarter mile from the front door, but still needed a half mile to complete 14.

I nearly said to hell with it, that was close enough, but no...I walked around the park once, lapped back, and hit the door at 14.01.

I did the same thing today that I did last week: broke it up into less mentally challenging chunks. At five miles, I planned on stopping to get a cheap McD's drink and change my socks (got a burger, too, because hell, I was hungry so why the hell not?)

At 10 miles I stopped for frozen yogurt and to change my socks (because, hell, I didn't get fries with the burger, so why the hell not?)

I had an unexpected detour into the grocery store because I realized my Camelback was getting low, and grabbed a drink to go, then headed towards the big city park.

And at 12 miles, my feet and knees were telling me "Enough!"

By then it was hot out, I was tired, and I just wanted to get home. Which was a mile and a half away. Funny how that worked, eh?

I think 14 would have been less problematic yesterday; today I was already a little tired when I started out, and while the first ten were all right, that last four kind of sucked. Especially the last half mile...I'm pretty sure I shuffled through that one at a wonderful 23 minute/mile pace.

Now, if only I had some vodka slush to cap off the afternoon...
Posted by Thumper at 3:27 PM

Because...why the hell not?!
Know what? I thinkI did another mile because I turned off the gps by mistake and turned it back on about a mile later. I decided to make a few stops to break up the walk...iced coffee and a stop in the park, a quick walk through bed bath and beyond... It made it easier! I'm tired but I feel pretty good.
We're going to be so ready on October 1st
R

Well, you're going to be ready. I'm going to be curled in a tight little ball on the ground, whining noooooooo and you guys will probably have to roll me along the route...