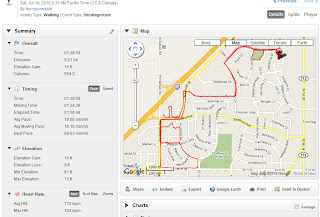 Walking a little faster yesterday made sleeping last night all kinds of fun...I was achy, overly tired I think, and slept like crap. Every time I rolled over, I woke up with an oh holy hell feeling, yet at the same time it wasn't too bad, because I knew it meant I'd pushed it a little.

Got up this morning, decided that since today on the schedule is only 5 miles, that I would push a little harder and go for speed. Great idea, right?

Having a great idea requires not being a moron. I dragged myself up and sat around for a little bit, prepped my feet, slapped on the sunscreen, grabbed my sunglasses, and was out the door. I was going to walk so fast, I'd be just a gray and white blur going past the fine people of Dixon.

What I did not do was

I started out all zippy and Yay Me! and quickly faded into WTF? I got 2 miles into it and realized, hey, I'm thirsty...where the hell is my Camelbak? So I darted into Safeway for bottled water. At 2.5 miles it was, Hey, I'm kinda-sorta-well-actually-very hungry. So at 3.5 I shuffled into BK and indulged in some French Toast Sticks (yeah, that was so hard on me.) That only left 1.5 miles to get home...5 miles of Holy Hell, Wabbt, you're kinda stupid sometimes.

I felt like I was moving in slow motion.

I uploaded the info from my neato Garmin Forerunner when I got back, and I was going a reasonable 3.2 mph...a little faster than yesterday. I would have guessed I was stumbling along at 2.8, but who am I to argue with technology?

Had I fueled up before leaving, taken the Camelbak and hydrated the entire way (I drank about the same amount regardless) I might have gone even a tiny bit faster.

I am such a freaking genius.

Someone should give me an award for that.
Posted by Thumper at 10:34 AM

Working on that award. Just can't come up with a socially acceptable name yet......