My asterisk...it has been kicked... 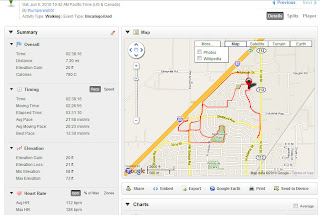 I thought about getting up early to beat the heat, but then I looked at weather.com, decided that high 70s-low 80s would be a good start on getting myself used to the summer heat, so I didn't get out the door until after 10:30. It was 77 and supposed to be around 83 by the time I was done, so I figured that was a perfect start.

Except...I started out without my spiffy white ball cap, and at .8 miles realized I needed it, so I headed home to get it.

Around 2 miles, I realized I was seriously uncomfortable, but I didn't feel sick, so I pressed on...though closer to home than I originally intended, just in case. I'm pretty sure that for the next 1.8 miles 90% of what went through my head was "It's hot. It's hot. Phck, it's hot..."

I stopped at McD's for a drink* at around 3.5 miles, sat down to enjoy the a/c, and then realized the mid-walk snack I'd brought with me was loaded with soy protein.

I strayed there for about 20 minutes, slapped some Moleskin on the balls of my feet, and then took off again, feeling much, much better, and not dreading the next 2.5 miles.

At 5.5 miles I realized I was very close to the frozen yogurt place, and since my stupidity stuffed soy death into my Camelback and I was both hot and hungry, I stopped there for another break.

Surely frozen yogurt has some protein. And the sugar for carbs was appreciated.

All I wanted at that point was to get home. For .7 miles I cursed my wimpy self, being that whipped by 83 degrees.

When I got home i was greeted by a burst of cold air, a cat who was annoyed at having his nap disturbed, and a thermomter.

*I do carry something to drink with me, but the bladder of the Camelback waist pack only holds 1.5 liters, and I've learned that's not enough...so I'm making use of McD's $1 drinks...
Posted by Thumper at 2:41 PM

H-O-T ... H-O-T! You did great in spite of the heat.
I was so disappointed that the heat did me in on Saturday.
I drank so much water I'm surprised I didn't float away!
Keep going my friend. You're fantastic!
R