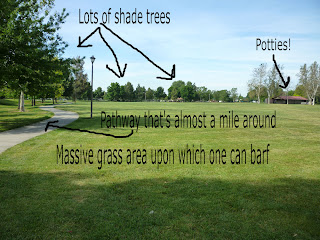 I've driven past this park a few times but I never paid much attention to it. We have a park closer to our house and usually go there to Trikke, but it's a little too close and walking around it for any length of time would be mind numbingly boring.

I didn't set out for this park; I just started walking, and after a short stop at Burger King (1.4 miles) to make use of their facilities, I headed down one of the busier streets in Dixon, and after deciding I didn't want to breathe in car exhaust for much longer, I just wound up at the park.

It's pretty much Walker Nirvana. The path around the part is just shy of a mile long, it's bordered by tons of shade trees, and there are 3 restrooms. If you don't want to walk the mile lap, there are paths that cut across, and if you need to collapse and throw up, there's tons of grassy area.

I was at 2.2 miles when I got there and went around three times, just shy of five miles. And thinking I would walk home the shorter way and hit right around 5.5 miles, I headed back...and realized geography and distances are not my strong suit. I was at 6.25 miles when I finally got home...not too shabby. 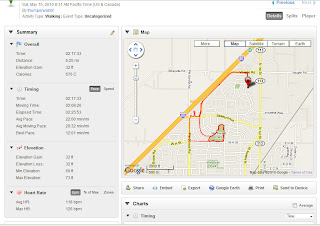 My hips didn't start whining until around mile 4, and they were crying at mile 5, and the feet joined in at 5.5, but I never felt like I wasn't going to make it. We'll see how cooperative they are tomorrow when I try to do it all again.

Oh, and tomorrow I am totally going to listen to that voice in the back of my head that says to visit the little girls' room before leaving the park, because I was in serious want of a place to stop at 5.5, with no where to go. Literally.

I'm not thrilled with my pace--a 22 minute mile pace--but since I went over 6 miles, I'll take it. It was a fairly consistent pace the entire way.

wow ... grassy areas to throw up. That's a plus! It's much easier when walking with a group. Lots of chatter and stuff.
You're doing great ... and 22 minute mile is perfectly respectable!
DON'T FORGET TO HYDRATE!!!
R
PS ... I came here via Jeter's blog and I'm too lazy to sign out/sign in/recomment.
just saying.

I hydrated. I hydrated so well I almost didn't make it home in time...that would have been embarrassing...

Now you have shamed me enough that I need to get my "fat" backside out the door and do some walkin.

I will take your advice and go see the pore-cee-lyn throne where I left my crown before I head out on my jaunt. Execellant advice.

Hey, your average MOVING pace was a 20 minute mile. So you must have stopped a few times to do nonwalking things.