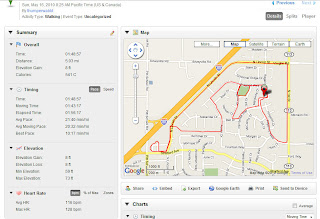 It was 56F when I left the house; it was about the same temperature yesterday so I dressed the same. Shorts, tank top, lots of exposed skin. Yesterday I was comfortable, so it made sense that I would be today.

Except today there was a little bit of wind, and I realized less than half a mile out that I was freaking cold.

Did I turn around and go back? No, that would have been the sensible thing to do. Instead, I kept walking, and when I turned the corner from Regency onto First Street, ahead loomed Walmart, and I told myself that if I was still cold when I was close to it, I'd run in and get a sweatshirt. I hoped I would be warmed up by then,  but if not, I had options.

You know, options that make less sense than turning around and going home for a sweatshirt.

By a mile and a half, though, I was warmed up and decided to head towards Burger King; there I could use the restroom if needed, and get an orange juice to fuel up.

I had a discussion with (mostly, a few others chimed in) Murf on Facebook yesterday; sometimes after working out I smell ammonia, and it's annoying. He's a but of a workout fiend and knows a few things, and had an answer for this: I'm depleting my carb reserves and am starting to burn muscle. Not exactly what one wants. He was nice and did not start using really big words that would have made my head hurt, but gave me just enough of an explanation to assure me I am not about to keel over and die.

So, I didn't worry about stopping for the juice. Extra calories, but extra fuel.

Now if he can tell me why my hands swell up when I walk, I might be happy.

I originally planned on shooting for another 6 miles today, but the SGK handbook had today listed as 4 miles, so I split the difference and did 5. My hips were hurting by then, but I wasn't wiped out, so I'll probably pull the Trikke out this afternoon and do a few miles on it as well, just for the hell of it.

Tomorrow is a rest day; any temptation I would have to Trikke will be nullified by the rain we're supposed to get, so I likely won't be doing anything too physical.

I think for the week, today's walk puts me at a little over 17 miles for the week on foot and 13 or so on the Trikke; next week I'll probably have more miles on the Trikke since I didn't take it out on Monday or Wednesday, I don't think, and I'll use it for more cross training this coming week.
Posted by Thumper at 10:59 AM

Oh yes ... the old "I'm freezing but I refuse to go back and get a sweatshirt" trick. Well, that's happened to me, yes it has, and I've needed days to thaw out! I was hoping to get a few miles in tonight when I get home from work ... but it's raining and I don't want to.
hmmm.
My hands always swell. Don't forget to hydrate ALL THE TIME!!!
My feet are always swollen, too.
Man ... I'm great looking!
You inspire me!
R