Appropos to nothing, this is what I use for water when I'm walking. I didn't want to carry bottles, because I hate holding things when I walk, and I didn't want a backpack with assorted crap in it nor did I want a typical Camelback.

This suits me just fine. It's a Camelback waist pack and it holds 1.5 liters of water. I throw a bunch of ice in it, then fill with water, and I'm set. The drinking tube wraps around my waist and there's a clip to hold it, and it's long enough that I can just grab it while I walk and drink without stopping.

Even though today was technically a cross training day (I wanted to Trikke but it was wicked windy and I didn't want to have to muscle the Trikke) I decided to walk. For fun. Who'd have ever thought I'd do that? I got in the car and headed for the air force base to walk the duck pond. 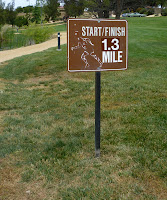 The sign at the start of the path that winds through the park and around the pond says it's 1.3 miles. And I believed it.

I turned on my Garmin and headed out...and after I'd lapped the entire park and pond, I stopped to double check. 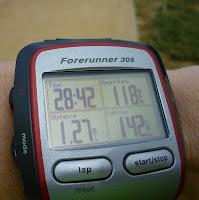 1.27 miles. It probably would have been 1.3 if I'd walked on the very outside of the path the entire way, but there were other people, and there were lots of little poop monsters leaving little landmines that had to be navigated around.

(Ignore the time...I wasn't walking for speed, I was stopping here and there to take pictures, which got me some strange looks... ) 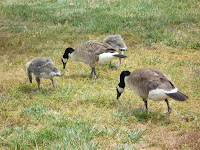 Poop monsters completely unafraid of people...they will walk right up to you and honk as loud as they can. Their little duck friends are no better...I walked for about 3 minutes with a duck right beside me, quaking its little head off.

I refuse to admit to talking back to it.

I went around 3 times...I intended to get a really good read on how far I'd gone, but I sat down on a bench at one point to get something out of my shoe, paused the Garmin, and forgot to restart if for about half a mile. So I can only guess at my actual distance and time. This was just for fun, though, so it really doesn't matter. 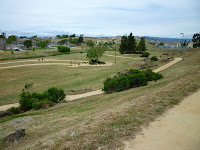 I also skewed the stats by stopping to take pictures. The view from the top of the first hill was kind of nice.

If I'd turned around, I would have had a spectacular view of the fence and security gate just beyond it. Luckily, no one with a gun seemed suspicious about me taking pictures there. 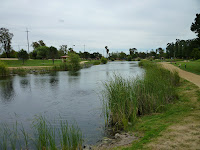 And the view around the pond (as long as I didn't look at all the poop on the paths) was decent, too.

I may actually be liking this.

I was not sick enough for this: 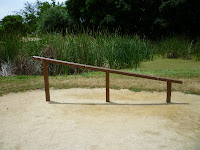 They want people to jump over the danged bar! That was an OH HELL NO moment.

(pictures of today's duck pond walk can also be seen on my Flickr page...)
Posted by Thumper at 3:49 PM

Couldn't see the pictures before ...
I'm going to look into that GPS.
I think I said it before ... but I'll say it again "Nice camelback."

The GPS is awesome...distance, pace, speed, heart rate, calories burned... It's a Garmin Forerunner 305; I got it on Amazon because they have it waaay cheaper than anyone else that I could find...