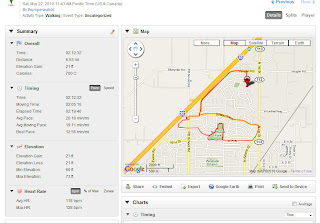 When you live in a small town, it doesn't take long to get to the less desirable neighborhoods. But at least here, less desirable really just means that they're old, not that you have to worry about getting jumped in broad daylight.

I walked though what's probably the center of the oldest neighborhoods in Dixon today; there's an odd mix of old houses in need of repair and old houses that have been kept so well they could be showcased in magazines, often right next to each other. When we were looking to buy we bypassed this area, mostly because we didn't want the work involved in all the repairs the foreclosures we saw around there would require, but still...some of those houses are awesome, and some are total crap.

I took the very long way to the park, and during my second lap of it I realized that there's a white car that's nearly always parked there every time I walk there. And there's almost always someone sitting in it. Drug dealer? Hooker? Who knows... but I find it really odd that it's always there, never in the same parking slot, and sometimes leaves and comes back in a half hour time span.

I did 6.5 miles today; I was tempted to go for 7 and would have, but at mile 6.3 I realized it was seriously clouding over, rain was falling over the west end of town, and appeared to be headed my way. With only about 3.5 square miles of town, I figured I'd save myself the soaking and go home since it was just around the corner.

Of course, it never did rain here, so I probably could have stayed out for the extra 10 minutes I needed, but the wind whipped up and I'm delicate, so I'm not totally bummed that I didn't.
Posted by Thumper at 4:00 PM